Hoffenheim finally rewarded themselves for their efforts and clinched the first victory in 2015. The southern derby against Stuttgart was dominated by physical challenges and both teams scored after a free kick in the first half. TSG picked up pace after the break and but failed to put it past Ulreich until Rudy's injury-time strike sealed the win. 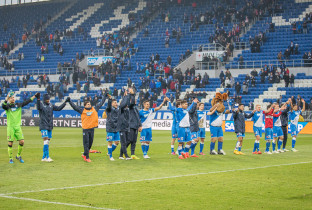 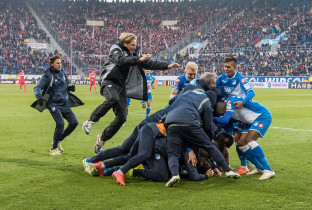 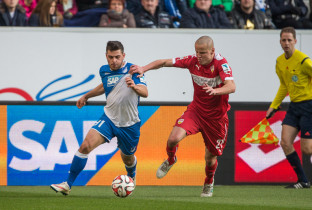 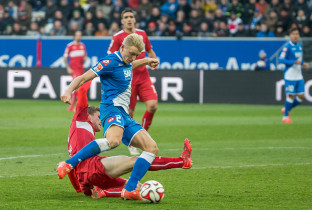 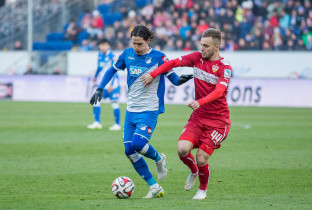 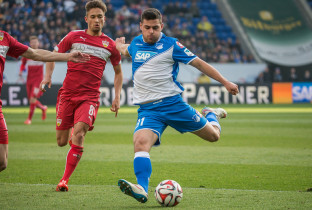 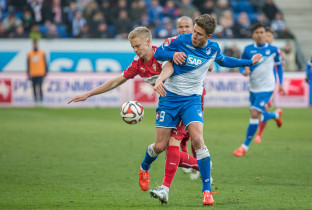 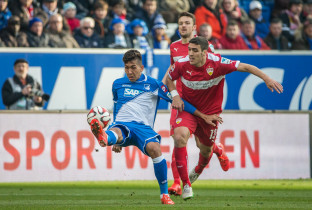 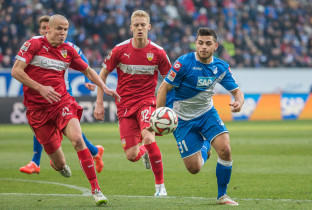 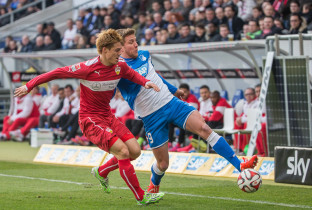 The flu made its rounds through the Hoffenheim squad earlier this week and threatened to rule out a number of key players. Fortunately, everyone but Adam Szalai recovered and was available. Nevertheless, head coach Markus Gisdol was forced to make a few changes to the team that started last Saturday. Eugen Polanski was sidelined after picking up his fifth yellow in Wolfsburg, Tobias Strobl had to rest with a thigh injury and Tarik Elyounoussi dropped to the bench. Sebastian Rudy, Sven Schipplock and David Abraham all came into the side.

Gisdol decided to play the same 4-4-2 system that resulted in a good second half against Wolfsburg. The back four was made up of Beck, Abraham, Bicakcic and Kim. Rudy joined Amiri, Schwegler, and Volland in midfield. They did especially well to change positions and occasionally the formation switched to a diamond with Schwegler in front, Rudy covering the defence and the other two manning the flanks. Firmino and Schipplock provided the goal threat up front.

23rd minute: Great effort! Schwegler delivers a corner to Firmino, but his header isn't accurate enough and goes over the crossbar. TSG are increasing pressure now, but Stuttgart are making life hard for the Hoffenheim attackers.

31st minute: GOOOAAAAL for Hoffenheim! 1-0: It's Roberto Firmino with his sixth of the season! Bicakcic's flicks on a Rudy free kick and Gentner bravely throws himself in the way of Abraham's shot. The rebound falls to Firmino though and he taps in. Deserved lead.

39th minute: GOAL for Stuttgart. 1-1: Gotoku Sakai levels for the visitors and it's a really unlucky goal. A free kick is cleared as far as Sakai, whose first effort is blocked, but his second attempt takes an unfortunate deflection off Bicakcic, leaving Baumann with no chance.

58th minute: That should've been Hoffenheim back in front! Firmino picks up the ball, charges down the left and surges through the Stuttgart defence, but Ulreich gets down well to keep out his shot from inside the area.

75th minute: TSG are increasing the pressure on the visitors. Again it's Firmino who initiates the attack. He seeks out Modeste, who has just come on for Schipplock. The Frenchman unleashes a shot on the turn, but Ulreich denies him with an amazing reflex save.

77th minute: Stuttgart with a rare opportunity from open play. Gentner has a go from 25 yards, but the effort is no problem for Baumann, who's having a relatively quiet afternoon.

81st minute: Unbelievable! TSG initiate a quick counter and Beck tries his luck from 18 yards, but Niedermeier gets his foot to the ball and deflects it inches past the wide post.

86th minute: Former Hoffenheim player Vedad Ibisevic picks up the ball on the edge of the TSG box and fires at goal, but it's no problem for the ever alert Baumann.

93rd Minute: GOOOOOAAAALLLLL for Hoffenheim!!! 2-1: Sebastian Rudy is the hero! He wins the ball in midfield and starts on a run through the middle. A quick one-two with Volland leaves the Stuttgart defence watching in awe and Rudy finishes off by nutmegging Ulreich. What a goal! With seconds left on the clock that's the first TSG win of 2015.

Firmino's boxing celebration. Perhaps he spent Friday night watching old Ali or Tyson fights? His right hook actually didn't look too bad, but it was more reminiscent of the Klitschko brothers. He needs to work on his posture and leg positioning though. Never mind, at least he knows how to curl a ball in with his right foot. Another top contender for the moment of the match is Sebastian Rudy's injury-time winner. What a strike!

Number of the match: 3

Why the number three, you may ask. Three points! Enough said.