On August 4th, Hoffenheim’s Niklas Süle and Jeremy Toljan lined up with the Germany men’s Olympic team against reigning champions Mexico in Salvador. At that point, the prospect of reaching the final in the world famous Maracana was something of a pipe dream. Now, that dream is set to be realised, as they prepare to meet the hosts Brazil in the closing game of the tournament, and the two TSG men are within touching distance of becoming Olympic champions. 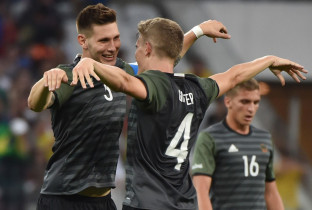 Even if at one point they may have been contented with silver, they have made clear that they are going for gold on Saturday evening (22:30 CEST). “We have a talented squad, and a lot of players with Bundesliga experience, and because of that I hope that we are in the best possible position to come back as medallists. It would be madness,” said Süle as he left TSG’s training camp in Tirol to join up with the Olympic squad. That madness is becoming ever more possible.

After Germany’s 2-0 semi-final victory against Nigeria a little over three weeks later, the centre back commented that it was “fantastic” and the team were determined to bring the gold back home. “No one thought that this would be possible after that first game against Mexico. We have really grown as a team.” Jeremy Toljan added to that. “We are really looking forward to the final in the Maracana, and once again we will give everything we have. We want to win.”

Of course, TSG head coach Julian Nagelsmann has his fingers crossed for his players. “I am very pleased for the both of them. The Olympics are always something big, and now for them to be in the final against Brazil is very special, and a unique moment in Niki and Jerry’s careers. I hope that they come home with gold medals around their necks. Still, silver would be a big achievement. I think they will both return to us with high confidence either way.”

“They are taking the final steps and will come back to us as Olympic champions” said Director of Football Alexander Rosen, wishing his best for the two TSG defenders. Both have been significant members in the impressive Germany side. “To have two Hoffenheim players in the Olympic final is exceptional, and we are all very proud of them.”

A New Level of "Madness"

Sporting Director Dr. Peter Görlich supported the sentiments of the coach and Director of Football, saying that everyone was “extremely happy for two Hoffenheim players to be in the Olympic final.” He continued, “They have a unique chance to earn gold. Niklas and Jeremy are showing the world what fantastic young players they are, and it would be a reward for all of us for them to return home as winners. This success is an acknowledgement that our work in developing young players and giving them a chance in our first team, and in turn that we give young players the opportunity to succeed at the highest levels. For us, it shows why we want to continue on this path. I will watch the game on tv on Saturday evening with my fingers crossed.”

In and around Sinsheim, and the whole Rhein-Neckar region, everyone will be hoping for the best on Saturday evening, hoping that the “madness” in Rio can reach a new level. ‘Niklas Süle and Jeremy Toljan: Olympic champions#. That already has a nice ring to it…