A first away victory in Europe! TSG Hoffenheim won 4-1 (1-0) at KAA Gent in the Europa League to claim their maiden away win on the international stage. Ishak Belfodil, Florian Grillitsch, Mijat Gaćinović and Munas Dabbur all scored as the Kraichgau club delivered a strong display in Belgium. 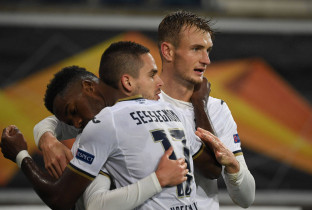 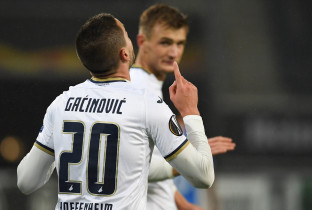 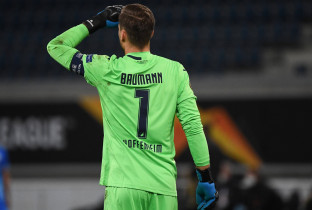 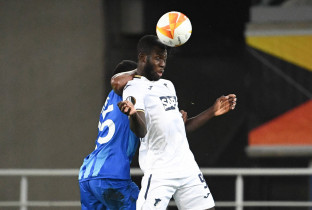 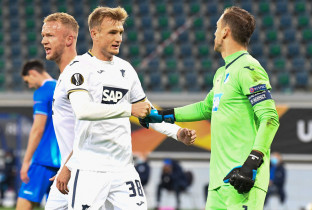 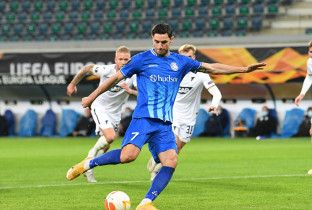 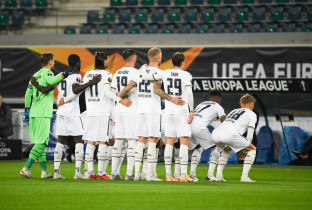 Head coach Sebastian Hoeness made five changes to the side that drew 1-1 at Werder Bremen. Oliver Baumann was reintroduced between the sticks in place of Philipp Pentke, while the back three of Stefan Posch, Kevin Vogt and Kevin Akpoguma remained unchanged. Ryan Sessegnon was brought back in on the left flank, with Robert Skov shifting over to the right. Florian Grillitsch replaced Dennis Geiger in central midfield, where he played alongside Diadie Samassékou and Sebastian Rudy. Ishak Belfodil and Ihlas Bebou returned to the team in attack.

TSG made a double substitution in the 67th minute, with Sargis Adamyan and Mijat Gaćinović replacing Bebou and Rudy in like-for-like changes. The next double switch came 10 minutes later as goalscorers Belfodil and Grillitsch made way for João Klauss and Christoph Baumgartner (77). The fifth and final change came on 82 minutes when Munas Dabbur came on in place of Posch, at which point Hoffenheim switched to a back four.

A penalty was awarded to Gent in the 14th minute for a foul on Roman Yaremchuk by Stefan Posch. But Oliver Baumann went the right way, stopped Yaremchuk's spot-kick and kept his side on level terms. That save laid the groundwork for TSG to claim a comfortable win.

First good chance of the match as TSG counter down the left. Grillitsch plays a one-two with Belfodil before cutting the ball back for Rudy, who targets the top corner from 16 metres but fires narrowly over. Shame.

Having been fouled in the penalty area by Posch, Yaremchuk steps up to take the resultant penalty and targets the bottom right corner, but it's a nice height for Baumann and he saves it at full stretch.

Skov steps up to take a free-kick from a central position 25 metres out, but he whistles it narrowly wide of the post.

Another free-kick and another shot from Skov. He goes for the bottom right corner once again, but Roef dives at full stretch and saves the powerful strike with his fingertips.

A goal is looking likely for Hoffenheim now: Gent's clearance goes straight to Bebou, who goes past an opponent. His subsequent effort is lacking precision, however. That was a good chance!

Bebou is played the ball in the penalty and gets a shot away. But his effort is blocked by a hand and a penalty is awarded, which Belfodil dispatches comfortably with a perfect shot into the bottom left corner.

Lovely move from TSG: Rudy crosses the ball into the box from the right flank and Grillitsch strikes it towards the bottom corner on the volley, only for Roef to make a strong save and keep the deficit to one goal.

What a brilliant attack from TSG: Posch feeds Bebou in the penalty area and makes a run into the box. The Togolese forward spots the run and tries the one-two but Posch lets the ball run through to Grillitsch, who fires it perfectly into the bottom left corner from 11 metres.

Substitute Odjidja-Ofoe poses an immediate threat when he is played in on the left side of the box, though Baumann gets down at the near post to keep out his shot.

Belfodil takes on an opponent and gets the better of him, though his shot from a centre-right position is saved by the feet of Roef in the Gent goal.

Belfodil has another chance a minute later. Akpoguma flicks on a Skov corner into the centre and Belfodil gets a foot on it, but Roef makes a strong save.

Belfodil has the ball on the edge of the box and squares it to Gaćinović, who curls it perfectly into the top corner. Spectacular strike!

Mohammadi goes clean through on goal all of a sudden, but after taking the ball past Baumann he hits the woodwork.

TSG leave themselves exposed at the back and Kleindienst has a tap-in from close range.

TSG respond immediately: Dabbur carries the ball into the penalty area and then hits the perfect shot inside the far post.

What a night #GNTTSG 1:4 #europaleague #tsg