Born in Spain, raised in Denmark and now a professional footballer in Germany - Robert Skov has certainly experienced his fair share of changes in life. His footballing career is no exception. Since his arrival at Hoffenheim in the summer, the right-winger has been converted into a left-back. The club's winter training camp in Marbella was something of a journey through the past for the 23-year-old - who is full of expectation as he looks to the future with TSG.

For a lot of people, Marbella is a little piece of paradise. Located on the Costa del Sol, surrounded by the Mediterranean on one side and mountains on the other, the Andalusian town is a tourist's dream. But when TSG Hoffenheim announced that they'd be travelling to Marbella for their winter training camp, the first thought that came into Robert Skov's head wasn't necessarily ''holiday,'' and with good reason: the Denmark international was set to return to his place of birth. It was in Marbella, on 20 May 1996, that Robert Skov came into this world. The 23-year-old had no reason to suspect that, half a year after his move to Germany, he'd be going on a journey through his past. In any case, was more than happy to return to where it all began: ''Obviously it's funny that we had our training camp here. This is the second time I've been back here.''

Nobody in the squad had any idea that Skov, a Dane playing his football in Germany, was in fact born in Spain. The Denmark international's parents lived on the Costa del Sol from 1994 to 1997; his father worked in a bank in nearby Gibraltar. Given that he only spent the first nine months of his life there, it's little surprise that Skov doesn't really identify as Spanish. ''I'm Danish, and have nothing that really ties me to Spain. It just happens to be the place where I was born. It's just a funny little thing, especially given that I went there with TSG. But my real home is Silkeborg - that's where I grew up and that's where I learnt to play football.''

Trips over the border to watch the Bundesliga

A taste for travel has always been present among his family. Long before he moved to TSG Hoffenheim, Robert Skov was a regular in the stands at Bundesliga matches. In his teenage years, he and his friends would often go on weekend trips over the border to Germany, where they would attend football matches in various stadiums across the country. Hamburg, Wolfsburg, Bremen, Hannover or Dortmund - no distance was too far for the enthusiastic young travellers: ''I must have gone to about 20 games. You can get to Hamburg in three-and-a-half hours from my home town of Silkeborg. We used to get up early in the morning, go to the match and then travel back home in the evening - I had to make it back in time to play the day after.''

Little did the young Skov know that, just a few years later, he would be running out in those same stadiums he used to watch games in as a youngster. Skov played for his hometown Silkeborg IF, first in the U19s and then in the first team in the Superligaen, Denmark's top tier. Although he was called up to represent his country at youth level, the big breakthrough still seemed like a remote dream: ''At the age of 15 or 16, I wasn't even one of the best players in the Silkeborg youth sides. I was a bit too small. It was hard for me watching everyone else grow while I stayed the same size. But I think it ended up helping me in the long run, because when you're one of the smaller players on the park you have to learn how to deal with certain situations in a more intelligent way. I worked really hard - and then I had a growth spurt and, all of a sudden, I seemed to have an advantage over everyone else. I was a late bloomer.''

The inauspicious start to his career ultimately proved beneficial for Skov, whose surname means ''Wood''. He gained his first experiences of senior football playing in the second tier, battling his way to promotion with hometown team Silkeborg. ''We had to fight for every point,'' says Skov as he reminisces about this phase of his career. The hard work put in both during matches and training paid off: in January 2018, Skov earned a transfer to top side FC Copenhagen. A tough bedding-in period was followed by his big breakthrough: Skov fired his side to the Danish league title, winning both the Golden Boot and the ''Player of the Season'' awards.

He still seems a little bit surprised about his own achievements: ''It all happened so quickly - for me too.'' Perhaps this explains why Skov has no airs and graces about him. Not out on the pitch - and certainly not in his private life. The 23-year-old, who already speaks excellent German, is calm and focused in conversation. Although he's become a star in his home country, Skov is just about as far removed as possible from the stereotype of a big-name footballer. Tousled hair, understated clothing - it's clear that the Dane is focused more on advancing his football career than his image. In day-to-day life on the training pitch, it's all about working hard to improve. Ambition and motivation are at the fore; nothing can distract from his sense of focus.

The Denmark international was more than happy to take on the new role proposed to him by his new head coach: Alfred Schreuder decided that the Golden Boot-winning right-sided attacker was to move to left-back. ''I have no problem with playing in defence. I'm not the kind of guy to say: 'No, I'm not doing that.' If it's what the coach wants, then I have to try to adapt and do as best as I can. It's certainly worked well so far.'' Nonetheless, the new role proved a challenge to begin with: ''I'd never played that position before, but you have to be flexible. That's what modern football is all about. I got a lot of support from the coaching staff. I'm giving it my all and I'm learning new things every day.''

The shift in position means that trips to represent the Denmark national team now represent a nice change. Skov still plays upfront in the team managed by Norwegian coach Åge Hareide, and he certainly hasn't lost his touch. A record of three goals in the last four international matches speaks for itself - and Skov believes it's partly down to his new-found expertise from TSG: ''Playing in defence has definitely helped me improve as an attacker, because now I know what my opposite number is thinking.'' This clearly goes both ways: his background as a natural right-winger means that when he plays left-back, he can anticipate what the player he's marking is going to do.

Dream of playing away in Denmark

Looking ahead to the future, Skov would like to go back to playing upfront at club level. The natural goalscorer misses lurking around the box for opportunities. He certainly made a good case for moving back up the pitch in the recent international break, when Skov's travels with Denmark brought him to another place of historic significance for his family. His first ever goal for his country was scored away - in a 6-0 win in Gibraltar. ''Unfortunately my dad wasn't there, but he was obviously really happy and found it funny that I scored my first international goal in the place where he used to work. Everything came full circle in a way.''

The young Dane's voyage of discovery is just getting started. Whether it's countries, positions or experiences - Skov is always happy to embark on new adventures. And he's certainly determined to go on a few more with TSG: ''I hope that we can play in Europe next season. The way things have been going for me recently, I'm almost certain that I'd end up having another rendezvous with the past. Playing for TSG in Denmark would be something else.'' 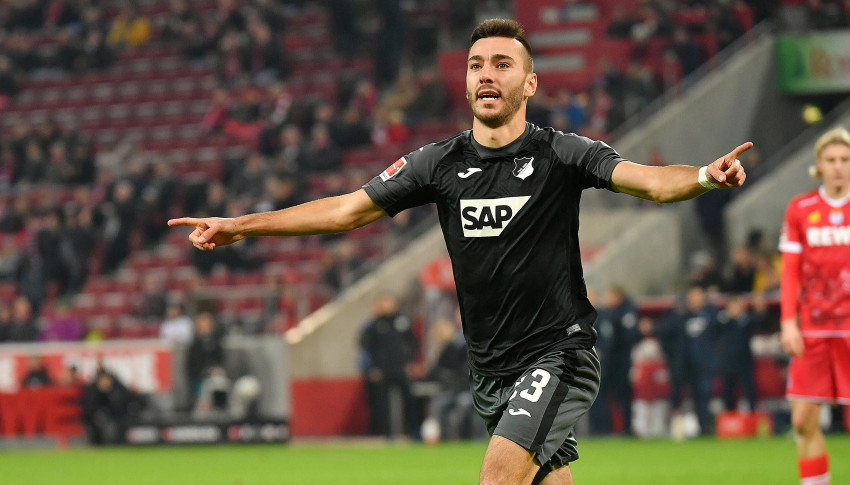