In recognition of the 150 Bundesliga appearances he has made in a TSG Hoffenheim shirt, goalkeeper Oliver Baumann was on Friday presented with a gift by director of football Alexander Rosen and managing directors Frank Briel and Dr. Peter Görlich. To celebrate the landmark, the 28-year-old was given a 3D figure of himself in his Hoffenheim kit. 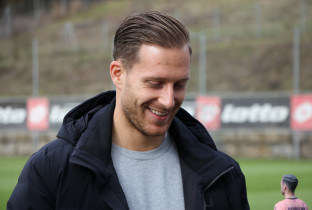 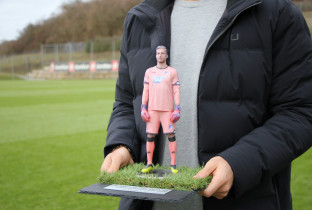 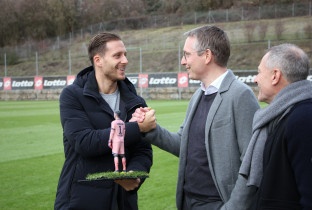 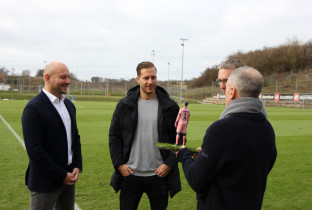 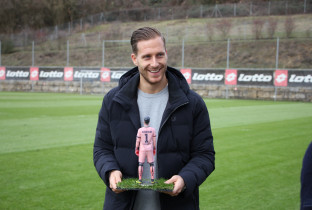 Oliver Baumann was visibly surprised when he was called out to the training pitch on Friday. But he was not asked to train. Instead, the club had prepared a little surprise for the shot-stopper, who was presented with a 3D figure of himself to retrospectively mark his 150th Bundesliga appearance in a Hoffenheim shirt. The model is made of a polymeric gypsum mixture and is 30 centimetres tall. The 28-year-old was absolutely delighted with the gift. "I really wasn't expecting that," he said. "I'd already received a shirt for my 100th Bundesliga appearance. I'm proud that we've followed this path together for so long and I'm excited for the upcoming games. This is really cool."

The TSG shot-stopper, who reached the landmark against Werder Bremen on Matchday 16 and has now made 154 Bundesliga appearances in total, has played more top-flight games for the club than any other goalkeeper. Hence why Baumann enjoys such high standing in Sinsheim. "I can still clearly remember when we bought Oli. Back then the goalkeeper was a position that generated a great disquiet in Hoffenheim. Oli has filled this void from day one until the present. We're proud that he has now made 150 Bundesliga appearances for us," said the TSG Hoffenheim director of football Alexander Rosen.

The club's record gloveman was already honoured for reaching the landmark when Hoffenheim played FSV Mainz 05 on Matchday 17. That was followed by the model presented to him today by managing directors Frank Briel and Dr. Peter Görlich and director of football Alexander Rosen.