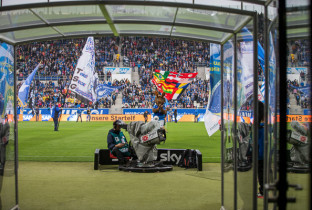 There was just one change to the side that narrowly lost to Borussia Dortmund last week, as Sejad Salihovic replaced Tarik Elyounoussi.

Markus Gisdol's side started the game focusing on staying solid defensively, but it wasn't long before their attacking talent came to the fore. Captain Andreas Beck crossed from the left on 14 minutes and found Sebastian Rudy in the middle. The midfielder expertly leant back to meet the ball with his head and directed it into the far corner of the goal. What a header! What a start!

TSG subsequently upped the tempo and created lots of chances. Their lead was deserved. Fully deserved. Firmino and Süle had chances before the half hour mark to double Hoffenheim's advantage. But it just didn't fall for TSG. Braunschweig were being caused countless problems by TSG's rotating attacking players and were struggling to limit the space Hoffenheim were enjoying.

TSG faded a little before the break and Braunschweig were able to create a chance. Karim Bellarabi shot from 18 yards in the 42nd minute but Jens Grahl produced a great save. At the other end, Firmino tried to assist his partner in attack Volland, who was completely free, but he was stopped at the last moment. The score remained 1-0 going into the dressing rooms at half time.

Little changed after the break. TSG dominated the match and were playing the ball in the right channels consistently and full of determination. The first major chance to make it 2-0 fell to Sejad Salihovic, who got onto a cross at the back post, but Braunschweig managed to clear it off the line after goalkeeper Davari had been beaten.

Braunschweig were unable to do anything moments later though. Tobias Strobl crossed from the left and Roberto Firmino volleyed in an unstoppable shot from 18 yards in true capoeira style. 2-0 after 64 minutes – a wonder goal! Then it was Kevin Volland's turn. He fired over in the 67th minute but made up for it just three minutes later after he converted Fabian Johnson's low cross from close range to make it 3-0.

Then came the numerous substitutions. Fabian Johnson came off to a well deserved round of applause from the fans in his final game for TSG. Sejad Salihovic and Kevin Volland, who are now set to join up with their national sides, also left the field of play.

The match then became quieter. TSG had given their fans a great display on the last matchday in yet again a sold-out stadium. Relegation-bound Braunschweig did manage to find the net in the 88th minute though via Hochscheidt and made it 3-1. But that wasn't going to change the final outcome.

The win was the perfect end to a very, very good season for TSG. A win and no injuries, Hoffenheim's Internationals in fine form – you can't ask for much more from a season that has seen TSG finish in ninth place with 44 points – the second-best tally in a Bundesliga campaign in the club's history. That'll do nicely.