It was not a derby day to remember for Hoffenheim, whose unbeaten start to the season came to an abrupt halt in Stuttgart. The hosts cruised to a 6-2 victory, with former TSG striker Vedad Ibisevic bagging a hat-trick. Kevin Volland and Roberto Firmino were once again on the scoresheet for Hoffenheim. 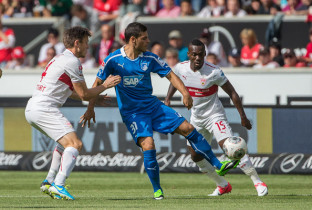 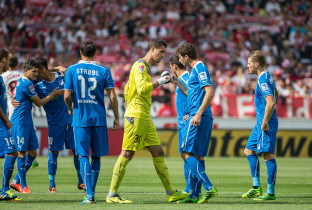 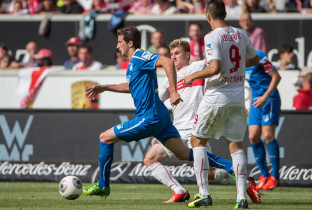 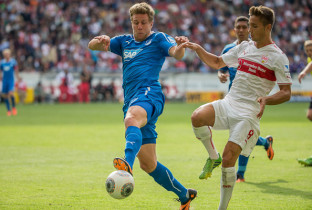 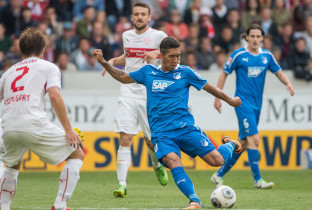 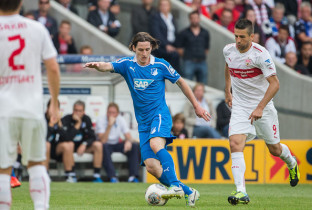 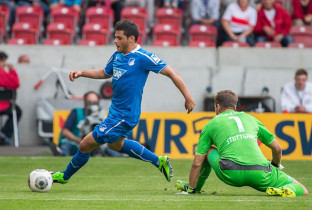 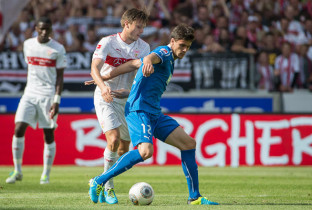 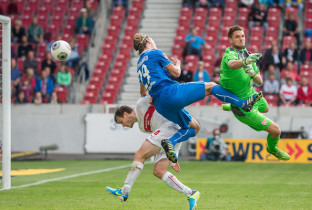 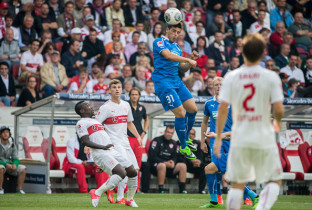 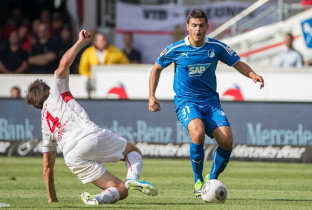 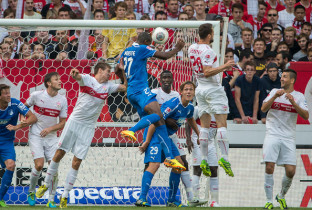 With Hoffenheim the side consistently providing the entertainment in the Bundesliga so far this season, a second derby in the space of a week was sure to provide another spectacle. Markus Gisdol could not name an unchanged side for this encounter though, with the suspended Sejad Salihovic replaced by Tobias Strobl. While TSG games have provided plenty of goals in this campaign, the ones that came in the opening 20 minutes won't have pleased the away side. Just 12 minutes in, Hoffenheim were caught sleeping at the back by Moritz Leitner's quick free kick. Alexandru Maxim was allowed to put an unchallenged cross into the six-yard box, where Antonio Rüdiger was alert to prod the ball home. Anthony Modeste had TSG's first chance six minutes later, only to get his angles wrong and drag a shot wide. However, that was soon followed by VfB's second of the afternoon. Another set-piece caused the damage, with Maxim's corner powerfully headed in by former Hoffenheim striker Vedad Ibisevic.

Markus Gisdol's side responded well, finding their first goal in the 26th minute. Kevin Volland was the scorer, but he was helped out by Rüdiger's attempted block. The Germany U21 international's strike from the edge of the box hit the Stuttgart defender's leg and bounced over the stranded Sven Ulreich and into the net. At 2-1, Hoffenheim will have felt back in the game, but that feeling lasted just 90 seconds. Maxim, who assisted the first two VfB goals, chased a long ball over the top and was given an easy task of finishing when Koen Casteels misjudged the pass and missed his interception. Just like against Freiburg last week, it was a frenetic first half, but like in Nuremberg, the half ended in controversial circumstances. Hoffenheim thought they had made it 3-2 after Tarik Elyounoussi lifted a bouncing ball over Ulreich, but the referee penalised the Norwegian for a push on Daniel Schwaab.

Markus Gisdol no doubt had stern words with his players at the break but that seemed to have little to no effect as Stuttgart grabbed a fourth goal just two minutes after the restart. A long ball deceived David Abraham this time and Ibisevic took the ball around Casteels and rolled it into the empty net. The hosts were showing no signs of their midweek European heartbreak and went on to make it 5-1 in just the 55th minute. Maxim, the man at the heart of everything good for Stuttgart, provided the best goal of the game, cutting inside Jannik Vestergaard and curling a delightful shot into the top corner.

There wasn't much happening in front of Sven Ulreich's goal in the second half but one chance that did arise for TSG should have been put away by Roberto Firmino. Elyounoussi skipped up the left wing and played a ball across, only for the Brazilian to put his side-footed shot wide. As was the case in the first half, a Hoffenheim chance was soon followed by a Stuttgart goal. Vedad Ibisevic rubbed salt in the wounds by completing his hat-trick, heading in a Werner cross that Casteels failed to claim. With the game long gone, there was barely a celebration when Firmino pulled a late goal back for TSG. Volland's through ball gave him the chance to score his third goal of the season and he duly found the back of the net, albeit with the ball trickling over the line. It was one of few positives for Hoffenheim to take away from a game that they will want to put behind them as soon as possible. The imminent international break gives Gisdol's squad the chance to forget about the result and come back with a fresh mindset for Borussia Mönchengladbach's visit to Sinsheim on Sunday, September 15th.