The leadership trio of TSG 1899 Hoffenheim e.V. is complete again: Simone Engelhardt was elected as the new second chairperson with 109 votes in favour at the members' meeting in the PreZero Arena on Saturday lunchtime. 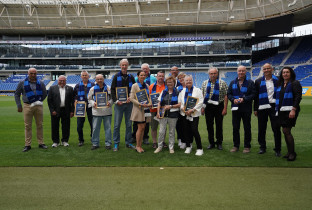 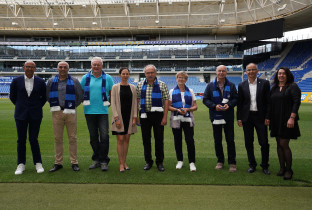 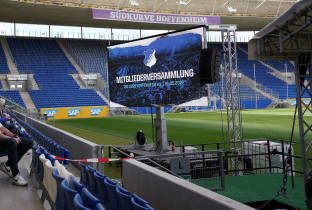 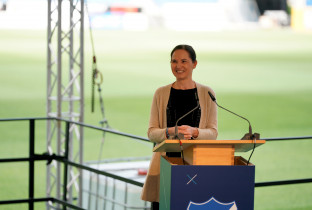 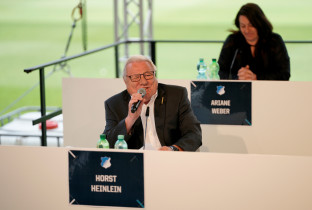 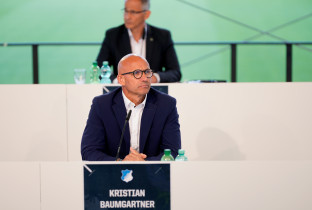 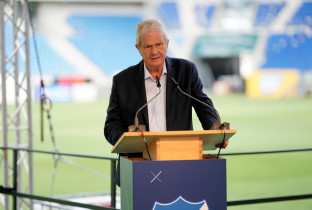 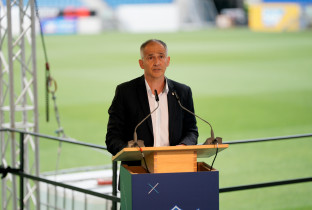 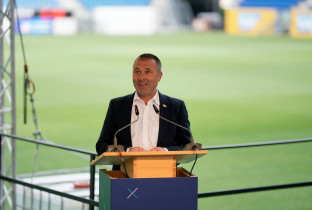 Frank Engelhardt was confirmed in his office as third chairperson, which he has already held for several years. This means that the positions below the first chair Kristian Baumgärtner are both occupied again with immediate effect, after the deputy chair had to remain vacant after the general meeting in 2021, at which Baumgärtner himself had been elected to his current office.

Simone Engelhardt introduced herself once again to the members shortly before her election. The 55-year-old from Hoffenheim is a TSG member through and through, and has been since she was a child, which is also documented by her 50-year membership honour, which she received on Saturday. In the past, she was very involved in children's gymnastics, apparatus gymnastics and rhythmic gymnastics at TSG Hoffenheim, but she also made her mark on football in Hoffenheim by volunteering to help set up the first professional structures in the administration of match operations, such as ticketing, sponsoring and event organisation, from 1998 onwards.

When TSG was promoted to the Regionalliga for the 2001/02 season, she handed over her duties to other members due to time constraints, but always remained connected to the TSG football team as a loyal season ticket holder. During the pandemic, she decided to become more involved in the TSG Hoffenheim e.V. on a voluntary basis again. "Many long-time colleagues approached me and encouraged me to take on new tasks. In light of the fact that I worked a lot with him in the past, it is also my goal to lead TSG e.V. into the future together with my colleagues in the spirit of our long-time and unfortunately much too early deceased president Peter Hofmann," said the mother of a 14-year-old son, who works in a managerial role at SAP as her main job.

The new appointments to the position of deputy chairperson and the confirmation of the third chairperson were part of a varied programme, which was moderated by Horst Heinlein, the stadium announcer at Dietmar Hopp Stadium. After a short welcome by Sinsheim's Lord Mayor Jörg Albrecht, third chairperson Frank Engelhardt honoured the members who had passed away since the last general meeting (2 October 2021). As always, this was the saddest item on the agenda. The members present paused for a moment in memory of Leopold Max, Dr Wolfram Flühr, Karl Heinz Eisinger, Siegbert Eichstädter and Ludwig Neu. "Every single one of them has shaped the club in their own way," said Frank Engelhardt, paying tribute to the deceased.

Kristian Baumgärtner, who was elected first chairperson last year, continued with his speech, in which he first thanked the staff of TSG Hoffenheim for their good cooperation, be it in the e.V. or in Spielbetriebs GmbH, whose managing directors Frank Briel, Denni Strich and Prof. Jan Mayer were present on Saturday.

Baumgärtner then focused on the commitment to grassroots sport, which is a great enrichment to the club. A short video was made especially for this purpose, which showed the variety of sporting activities in the e.V. and was screened at the beginning of the event. Whether youth football teams, the integration team, the old men's team, the gymnastics department headed by Ariane Weber or the referees - they are all active with great enthusiasm and, above all, fun, as Baumgärtner underlined, concluding with the sentence: "I am firmly convinced that TSG will once again be the talk of the town in the coming year.''

''It's important to look to the future''

Majority shareholder Dietmar Hopp also spoke to the members afterwards, first promoting the election - later successful - of Simone Engelhardt and Frank Engelhardt. He took a critical look at the sporting performance of Hoffenheim's competitive football teams (first team, U23, U19, U17, women in the both divisions) in the 2021/22 season and outlined the measures that will be taken to perform more successfully again in the coming years. "It is important to look to the future," emphasised Dietmar Hopp.

The floor then belonged to Metin Aktay, another long-time TSG member, who as referee representative gives the Hoffenheim referees a voice and gave insights into officialdom, which in his experience used to be accorded much more respect. "A referee has to make an average of 200 decisions in a match. That's why there will never be a football match without wrong decisions, because we referees are also just human beings who make mistakes," he stressed.

Jens Lehmann from Heddesheim is now on his 25th assignment as auditor at TSG, as he outlined when he presented this year's finances. "We assessed the financial year to 30 June 2021 without any objections," said Lehmann . Lehmann thus provided his cash audit with an unqualified audit certificate as usual. The net loss for the year was 185,161 euros.

Before the election of the second and the re-election of the third chairperson was carried out under the direction of lawyer Helmut Kuhr, the board was relieved at the request of Mayor Albrecht, passing with 109 votes in favour and one abstention. As usual, the general meeting concluded with a few "mood boosters": Baumgärtner confirmed that membership fees will not be increased again; members who have been loyal to TSG for 50 years were honoured with commemorative photos; and all guests had the opportunity to refresh themselves with a Wurst and a cold drink in the stadium grounds.

Honorary 50-year membership of the club

*This is not an accidental duplicate: there are two Simone Engelhardts who are members of TSG e.V. - and both have been for 50 years now!

Gold badge of honour for 40 years of club membership

Silver badge of honour for 25 years of club membership 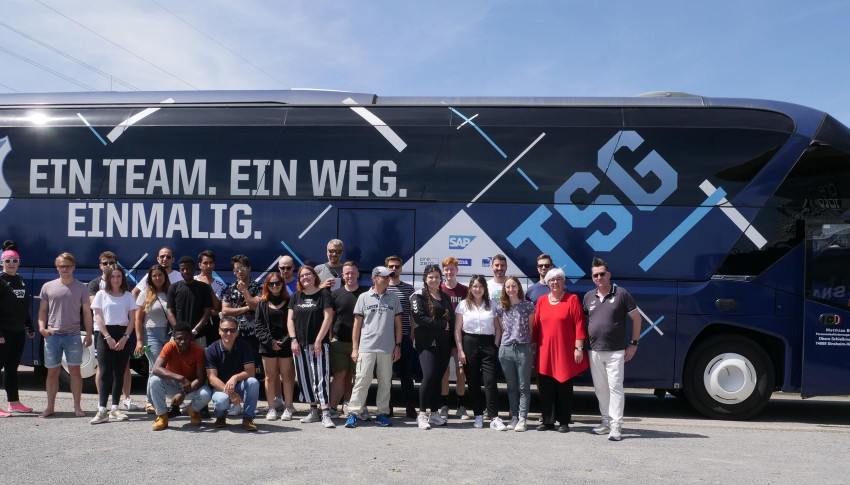 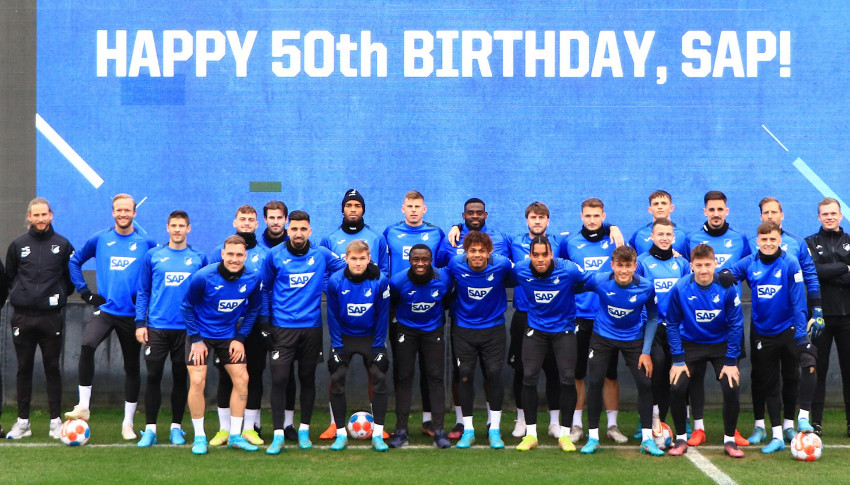 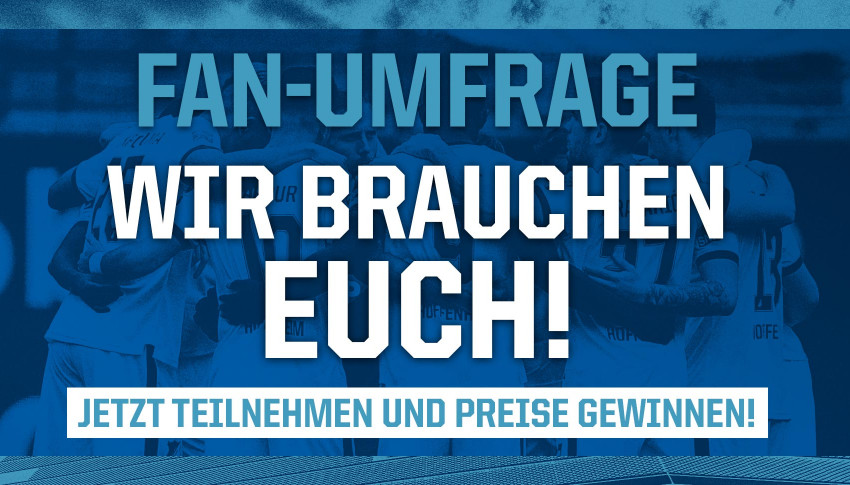