TSG picked up their first three points of the UEFA Women's Champions League thanks to an impressive 5-0 (1-0) victory over Danish champions HB Køge on Matchday 1. Coach Gabor Gallai's charges impressed across the board in the opening half, but only scored one goal through Katharina Naschenweg – despite creating a plethora of chances. But the ladies from the Kraichgau continued precisely where they had left off in the second half and added further goals through Nicole Billa, Luana Bühler and Tine De Caigny. De Caigny then scored another goal in stoppage-time. 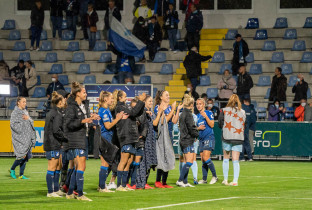 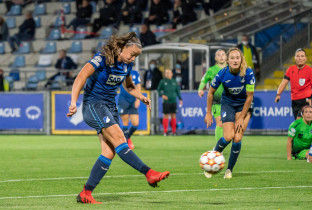 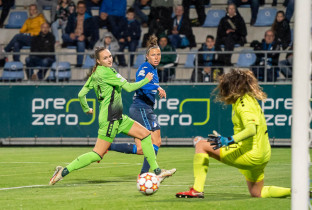 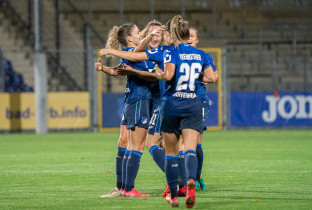 It took a strong 2020/21 season culminating in a third-place finish and two hard-fought qualification rounds to set up this atmospheric evening of Women's Champions League football in Hoffenheim, and hear the anthem created especially for this competition ring around the Dietmar-Hopp-Stadium in the group stages for the first time. Precisely 780 spectators had made their way to Silbergasse to witness the club pick up their first-ever three points in the Women's Champions League. That figure included approximately 30 away fans from the Danish port city.

Head coach Gabor Gallai made two changes to the starting line-up that beat Eintracht Frankfurt 2-1 on Saturday. Jule Brand had to miss out through illness, while Sarai Linder dropped to the bench to begin with. They were replaced by Chantal Hagel and Tine De Caigny respectively.

Gallai lined his team up in a 4-4-2 formation, with goalkeeper Martina Tufekovic protected by the central defensive pairing of Luana Bühler and Michaele Specht and the Austrian full-back duo of  Laura Wienroither (right) and Katharina Naschenweg (left). Captain Fabienne Dongus sat centrally in front of the back four, with Jana Feldkamp to her right, Hagel to her left and Gia Corley in front. The strike partnership consisted of De Caigny and Nicole Billa. In addition to Brand, forward Petra Kocsán had also fallen ill and hadn't recovered in time to face Køge.

TSG's appetite for European competition was clear to see from the first whistle. Gallai's charges seized control right at the outset, radiating enthusiasm and looking lively. A header by De Caigny was disallowed for offside in the 12th minute, but shortly afterwards TSG registered their first goal of the group – and it could hardly have been a better one, with Naschenweg firing a left-footed shot into the top corner from the edge of the box (18). The women from the Kraichgau continued to play with confidence on the ball, dynamism and versatility, with only the excellent American goalkeeper Kaylan Marckese stopping their lead from growing before the break.

In the second half, the Scandinavians obviously set out to play with more control and assert themselves more physically. But TSG were unperturbed. Two minutes after the restart, Billa slotted home to make it 2-0 after being teed up by De Caigny, before Bühler (61) and De Caigny (63) found the net in close succession to put an end to Køge's hopes of leaving Hoffenheim with something tangible.

Ultimately, TSG shot-stopper Tufekovic was not tested seriously throughout the entire 90 minutes. De Caigny then completed the scoring with her second goal of the game on the stroke of full-time to round off a perfect evening.