Here’s what the players and coaches had to say after TSG Hoffenheim's 1-0 victory at FSV Mainz 05: 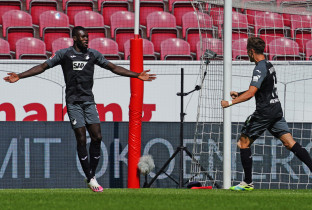 Håvard Nordtveit: "We gave everything. In the end, it was a game with the emphasis on battles – just as we Scandinavians love it. In the first half in particular, we were very good from a footballing perspective. And in the end, we fought for the victory. It was very difficult in the second half, but getting the win feels great."

Ilhas Bebou: "We always tried to play the ball forward and also had some chances to score. Even in the games we haven't been able to win, we have put a lot of effort in, but didn't score the goals. This time it was the other way round – Mainz tried hard, but were not successful. We fought hard and held firm against Mainz. The win is of course enormously important for us. We want to climb further up the table. We have the chance to win every game. Whether we will manage that is up to all up to us. We want to really get stuck in to every game."

Sebastian Rudy: "It was important to get the win today, because we wanted to stay around the top. We are now only interested in the individual games. What will come out of that in the end, we will see. Mainz had two or three good chances, and we had two or three in the second half too. It was a combative game from both sides. We didn't allow them much, we defended well, and put it all on the line to take the three points home with us.

Oliver Baumann: "We are satisfied. We carried on where we left off after the victory against Cologne. We showed the same character and mentality as against Cologne. That was our goal. We met the minimum requirement from a defensive point of view and ultimately managed to keep a clean sheet. We are over the moon that we won. The first half was crazy and we definitely got right down to the nitty-gritty, but being able to fight is just what we need to get points on the board. The commitment and the desire were top class."

Alfred Schreuder: "It was an intense game. It's a real pity that the spectators were not allowed to come into the stadium. Otherwise, it would have been a top game. The fight we showed was incredible – the team had a great attitude. In the first half, we played excellent football. In the second half, we defended very well. On the other hand, we didn't create very good chances. Mainz might have deserved a little more, but that's football. I'm very proud of the team and how they got stuck in."

Achim Beierlorzer (Mainz 05 coach): "We are disappointed, of course. In terms of the mentality, we were great. The changes worked too. In the second half, we were able to generate even more pressure. The fact that we didn't score a goal is very disappointing."