A few days ago, Niklas Süle celebrated his 24th birthday. Despite his young age, the TSG academy product and former first team star, now plying his trade at Bayern Munich, has already experienced a lot. He sat down with achtzehn99.de to share his memories from his Sinsheim days, talk about the importance of school and discuss the many hurdles he faced on the way to becoming a professional.

As we get hold of Niklas Süle on his mobile phone, he’s just been out walking the streets of the Munich suburb of Straßlach with Django, his French bulldog. Although Django certainly demands a lot of attention, Süle is more than happy to take the time to reflect on the old days. He might not be the same "little boy" who first arrived at TSG as a 1.90 metres tall U15 player, but Süle remains conversation as he did in January 2010.

Niklas, you’ve won both the Bundesliga and the DFB-Cup with Bayern Munich and already represented Germany in the World Cup - can you still remember your time in the TSG academy?

Of course! The time in which I stayed at the academy, living under one roof with my teammates, was the best of my childhood, if you can still call 17 childhood.  We were a great group and did a lot together. Of course we also got up to some hi-jinks, but that’s to be expected at that age, no? It was a very nice time in my life, which I often think back to and which I could easily write a book about.

Everyone at the TSG academy is very talented and everyone is dreaming the same dream. Only very few of them ever make it all the way to the top. What were the biggest hurdles you had to overcome?

I left home when I was 14 and had to give up a lot of things. Being without friends and family in Hoffenheim was a huge step for me. But my hometown of Frankfurt was still relatively nearby, others came from further away. I think it’s difficult for anyone to start a new life away from their inner-circle. We trained like professionals and also had to juggle that with the demands of school. That wasn't easy, and that's why I made the decision to stay in the academy. It meant I could get everything I needed under one roof.

Let’s talk about school. How important is your school diploma to you today as a Bundesliga player?

I'm very happy to have graduated - and I'm not saying that now because it sounds good. When I was trying to go professional I was also in the middle of preparing for my GCSEs. My teacher back then, Mr. Busch, really helped me find the balance between the two. I’m still very grateful to him today.

What tips can you give our academy players today?

You have to be able to withstand adversity. There will always be stumbling blocks and hurdles: maybe a coach who sees things differently than you, problems at school, girlfriend issues, friends who want to party and drink. You have to be able to tune out of all that. Things don't always go the way you want them to. As a young player, you have to have a sense of just how much you want to fight for your goals. You get a lot of help, but you have to take the decisive step yourself. You are well prepared, but everyone has to grow into the role of a professional, the pressure is completely different. Obviously talent plays a big role, but I’ve come to learn that almost everything comes down to mental strength. You don't get anything handed out to you on the way up, but, at the end of the day, quality prevails and hard work pays off.

Your cruciate ligament rupture in December 2014 was also something of a stumbling block...

I had just managed to pin down a starting place and then had to sit on the sidelines for eight months. And this all came at a time when I was ready to take the next step in my development. It was really hard to accept, especially because I didn't know when and how I would come back. But I came to accept the situation. That’s exactly what I was talking about when I mentioned ''adversity.''

You were able to achieve your dream of a professional career. What are your aspirations now?

If someone had told me that I would already be a Bundesliga and DFB-Cup winner at the age of 23, I would have been absolutely delighted with that. I’m very pleased about what I’ve managed to achieve. But I still have other dreams - to win the Champions League, play in lots of international tournaments and lift trophies with the German national team!

What was a special TSG moment for you?

My first-team debut against Hamburg. Never again have I been so nervous going into a match. I don’t think I played all that well either, but I’d still say it was my best moment. I said to myself back then: the long road has paid off, you’re a Bundesliga player, no-one can take this away from you.

And from your time at the academy?

I like to think back to the semi-final of the U17 German Championship, which we lost 3-2 away to 1.FC Cologne. That was the first time I’d played in front of a big crowd at club level and I managed to score a goal. I also remember when Alexander Rosen and Julian Nagelsmann took over as coaches on the last matchday of  the 2011/12 season and we narrowly managed to avoid relegation from the U19 Bundesliga. Unfortunately I didn't win any titles in the academy, but a lot of the boys from my age group managed to make it as professionals.

Keeping in touch with a large group of people is very important to me, but it can certainly be difficult in this environment. When we play in Sinsheim, I always like to stop by in the dressing room and talk to Otmar Rösch (athletics coach), Manuel Kreuzberger or Peter Geigle (both physiotherapists). As for my former Hoffenheim teammates, I still have a very close relationship with Jeremy Toljan. 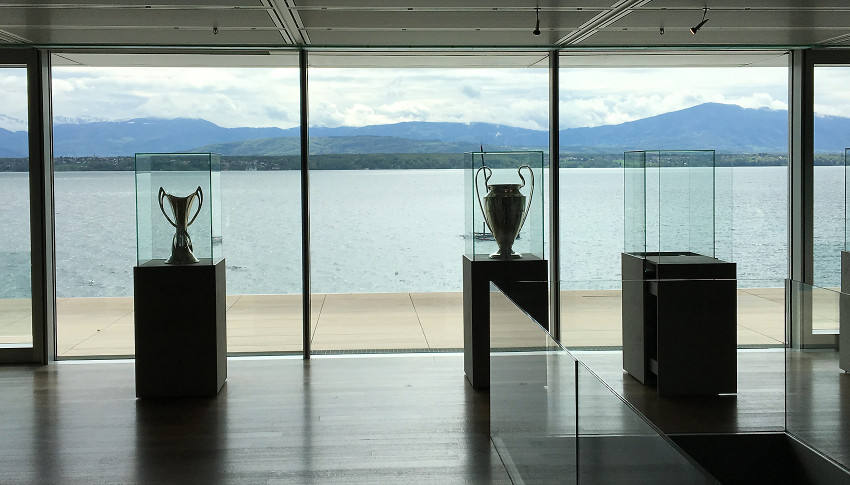 U19s head home with many memories of Nyon