Both the U15s (pictured) and the U14s put in strong performances in tournaments played this weekend gone. The new-borns of 2004 managed to go all the way and win the U15 Cup in Nassig. The 2005 boys kept four clean sheets in the U14 Cup in Wüstenrot to make it to the final where they were just beaten by Bayern. Meanwhile, the U16s celebrated two brilliant victories in friendly matches under their new coach Kai Herdling.

The U16s immediately notched up two hugely convincing friendly wins under their new head coach Kai Herdling. The B-Juniors won 8-1 against FC Astoria Walldorf while SV Darmstadt were defeated 8-0. "The boys have been very receptive to what we want these last three weeks and have now implemented what we have been working on together in these first two matches", said Herdling. "The results are of secondary importance. What is significant is that the performance was good in both games. I saw plenty of good approaches which we will be able to continue building on after the break."

Wolfgang Heller, head coach of the U15s, has managed to extend his winning streak with the 2004 year group too. The TSG Juniors immediately went and won the first tournament of the 2018/19 season for themselves. However, TSG had to be satisfied with a 0-0 draw against the robust team fielded by FC Augsburg in the first group game of the U15 Cup in Nassig.

Nonetheless, the Kraichgau boys were then soon able to celebrate their first win in the second group stage match against FC Ingolstadt thanks to a goal from new signing Leon Leuze. After that, the young charges showed just how goal hungry they were in a 6-0 rout of 1. FC Nuremburg, with Tom Bischof scoring a hat trick. Umut Tohumcu bagged himself a brace in the same game while Henock Liyew also got his name on the scoresheet.

With seven points from three games, TSG had already secured a spot in the semi-final before their final group stage match against Viktoria Aschaffenburg, though Heller's outfit kept up the pace despite this to complete this stage of the tournament with a 2-1 win courtesy of another brace from Tohumcu.

The Würzburger Kickers were the semi-final opposition. They were sent packing thanks to 1-0 win brought about by a Bischof goal. The boys then faced SpVgg Greuther Fürth's second league youth development squad in the final. Liyew scored a poacher's goal after reacting fastest to a free-kick, and that was sufficient to hand TSG's 2004 year-group the victor's cup.

Heller was satisfied with his new squad's first appearance: "We improved defensively as the tournament progressed and allowed our opposition fewer chances on goal. In possession we played some nice combinations, but we needed to be better in taking our chances with the exception of the Nuremberg game", said the U15s head coach. He was pleased with the U15 Cup in Nassig, which was being held for the first time. "The matches were varied since each opposition team had a different approach to the game. The various playing systems meant we had to adapt on a number of occasions, and the boys did that well."

U14 Cup in Wüstenrot

The U14s demonstrated brilliant organisation while playing in a tournament in Wüstenrot this weekend. Coach Sebastian Haag's team first played against the Wüstenrot DFB base camp team, who were beaten 2-0 owing to goals from new players Diren Dagdeviren and Max Nauerth.

They then had to go on the defensive against the Stuttgarter Kickers, Karlsruher SC and Bayern Munich, but managed not to concede a single goal. Ergo: three no-score draws. Finishing second in the group was enough to earn them a spot in the semi-final, and this game against VfB Stuttgart was also goalless by the end. And so to penalties it went to decide who would play in the final. TSG were to win thanks to well-taken spot kicks from Moritz Hütter, Felix Binder and Tim Drexler, as well as a save by goalkeeper Leon Sommerlad.

The scoreline stayed at 0-0 for a long time too in the prestigious final against Bayern, before the championship record holders were awarded a penalty one minute before time was up, a set-piece they duly converted. Consequently, Haag's boys had to be content with second place overall. The coach did likewise at the end of the tournament: "After two weeks of training we have made the next step forward and improved in many areas. The boys will recover well in the break across the next two weeks before continuing with their development during the training camp that follows", stated Haag, who had elevated the U13 players Baton Hajrizaj and Jarzinho Malanga: both had contributed to the U14s. 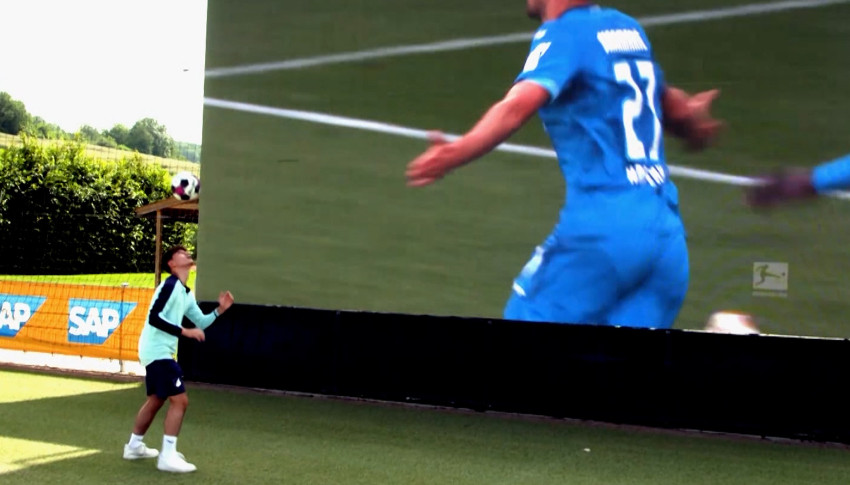