"The Miracle of Dortmund" still conjures up vivid memories in the minds of all Hoffenheim fans. Sejad Salihovic scored two penalties on the final day of the 2012/13 season to stop TSG from being relegated automatically, with the club subsequently preserving their top-flight status by beating 1. FC Kaiserslautern in the play-off. But they almost didn't get over the line that day in Dortmund's temple of football: Borussia levelled the score at 2-2 in stoppage time − and referee Dr. Jochen Drees initially allowed the goal to stand. But then his 23-year-old assistant Benjamin Brand intervened. With emotions boiling over, the linesman kept a cool head and trusted his eyes as he consulted with the referee and explained that the goal should not stand. Drees disallowed it and TSG lived to fight another day in the Bundesliga. For the special edition of SPIELFELD that was published on Monday, Brand, now 29, casts his mind back to that match in Dortmund, which had a significant impact on his career and TSG's Bundesliga history. 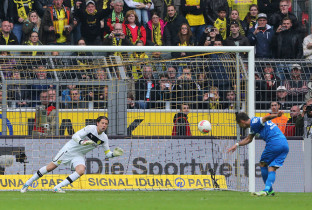 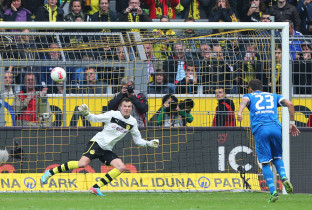 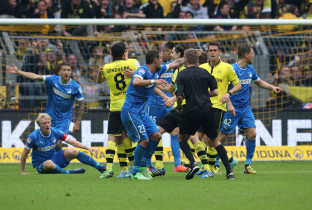 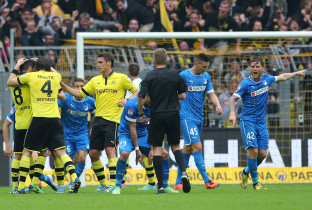 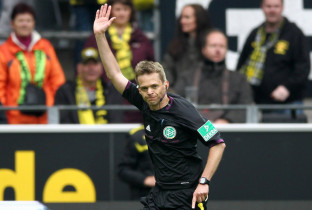 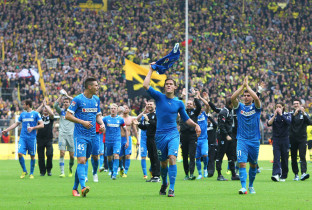 Mr. Brand, five years have passed since that match. You're now a referee in the Bundesliga and you've experienced a lot, so just how fresh are the memories of 18 May 2013 in your mind?

"I can still picture it clearly in my mind. It was a very exciting game, a match where there were a crazy amount of interesting decisions to be made. Our team had a tough task on our hands from the beginning – and that continued until stoppage time. Moreover, it was my first season as a linesman in the Bundesliga and my debut alongside Jochen Drees. The circumstances were certainly quite extraordinary."

TSG had turned the match around, but the ten men of Dortmund − including stand-in goalkeeper Kevin Großkreutz − were attacking in search of an equaliser. Then the goal goes in, and you intervene. What was your take on that incident?

"I saw that Lewandowski was standing in an offside position and had made a movement towards the ball. Referee Jochen Drees pointed to the centre circle, but I said via the radio: 'Jochen, we need to talk! We need to talk! We need to talk!' He then came over to where I was standing on the sidelines and I explained to him what I had seen. The offside situation was very difficult for him to assess. But he could imagine only too well that Lewandowski's movement had impeded the goalkeeper. Of course, I was in the better position to make the offside call. We then took both points into consideration and made a decision – which, fortunately, was the right one. But we were both sure of ourselves from the outset."

"I freeze-framed the image in my mind"

The Hoffenheim players came running over to you; they were protesting loudly and gesticulating wildly. Then there was all the noise in the stadium – can that sometimes have the impact that you suddenly doubt your initial impressions?

"In that moment, I exclusively focused on the image of the offside position. I didn't want that picture to disappear from my mind and so I kind of freeze-framed it. Then the dialogue took place and I was only looking at Jochen as he came running over to me. Thinking back now, I couldn't tell you which or how many players I had protesting in front of me. The only thought I had in my mind was to be able to clearly describe the image I had in my head. Everything else – and that's probably one of the key skills as a top-level referee – was completely filtered out. Fortunately, the communication went superbly well."

It was a courageous step to intevene in that situation and in that setting. You could have adopted the motto of giving the attacker the benefit of the doubt and let play continue...

"Those are thought processes that I've never had as a referee. If as a referee you let yourself be influenced by that, or by the emotions in the stands, then you're heading down the wrong path. When it comes to making the correct call, it's completely irrelevant whether 50,000 or 80,000 fans in the stadium are roaring, you're way too focused."

"I just wanted to make the right decision"

But you were still very young back then and didn't have much experience – and it was a decision that had huge ramifications...

"In that moment, I wasn't even aware of the fact this situation would decide the relegation battle. I didn't know the Fortuna Düsseldorf result (editor's note: they lost 3-0 at Hannover) and I just wanted to make the right decision. It wasn't until I saw the reactions of the players on the pitch after the final whistle that the consequences became clear to me."

BVB coach Jürgen Klopp was extremely angry with the match officials after the final whistle. But did the Hoffenheim contingent thank you?

"One can't expect the participants to accept such important decisions without a show of emotion. Jürgen Klopp did not agree with the decision, he explained that to us very emotionally. But then that all gets forgotten a short while later. Nonetheless, it's not an easy matter to deal with situations when you haven't even seen a replay of the action on television yourself yet. So all you can actually say in those situations are things like 'We can talk about it later' or 'Let's go back to the changing rooms and all cool down a bit'.

You were probably happy to get back to the changing room?

"My phone wouldn't stop going off. It was then that I knew the decision was the right one. My colleagues, my family and my now wife were congratulating me. That obviously did me good at that moment, I breathed a sigh of relief. By coincidence, I refereed one of TSG's pre-season games a few months later. Sejad Salihovic came and spoke to me about the incident, and expressed his respect for the decision. Obviously it was nice to hear that, but I don't expect to get any thanks from the players. Our job is to make the right decisions."

At that point, it was the most important decision of your career. But now you oversee Bundesliga matches as a referee. Did that moment impact your career?

"It did give me a certain boost and was very important for my self-confidence. And then there were my colleagues who saw a young guy on the sidelines who had made a decision that took the spotlight off Bundesliga referees over the summer. The criticism would've been huge. So in retrospect, it was a hugely significant moment – for myself and TSG."

An edition of SPIELFELD is published once a month. It's full of important stuff – what's happening at TSG, around the club and in the region. If you don't want to miss out and want to stay up to date, then get our monthly magazine delivered to your home – and the first six months are free of charge. To sign up, visit: 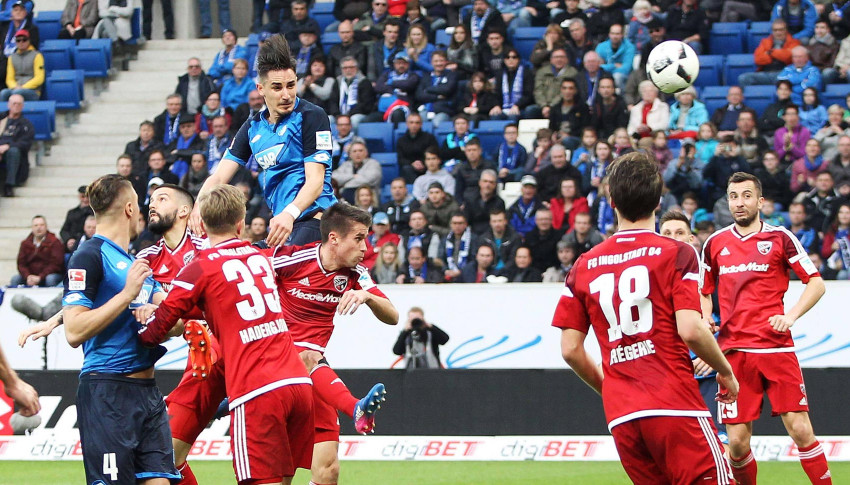 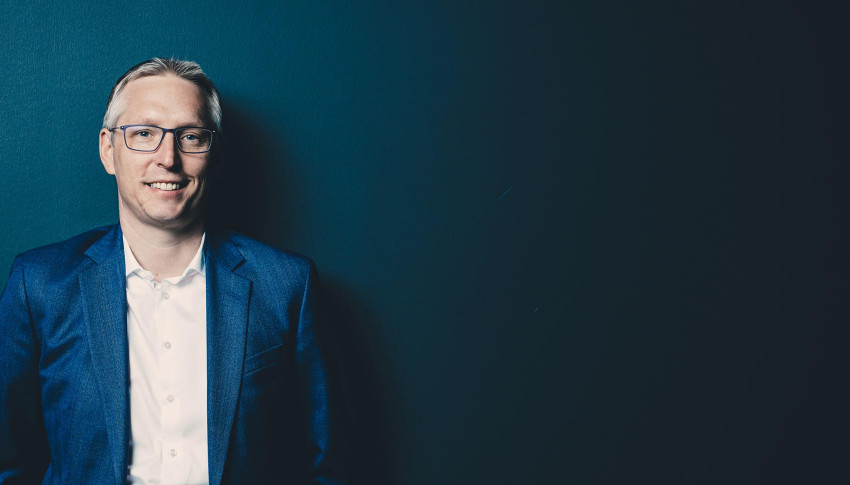 Frank Briel: ''This remains a record-breaking... 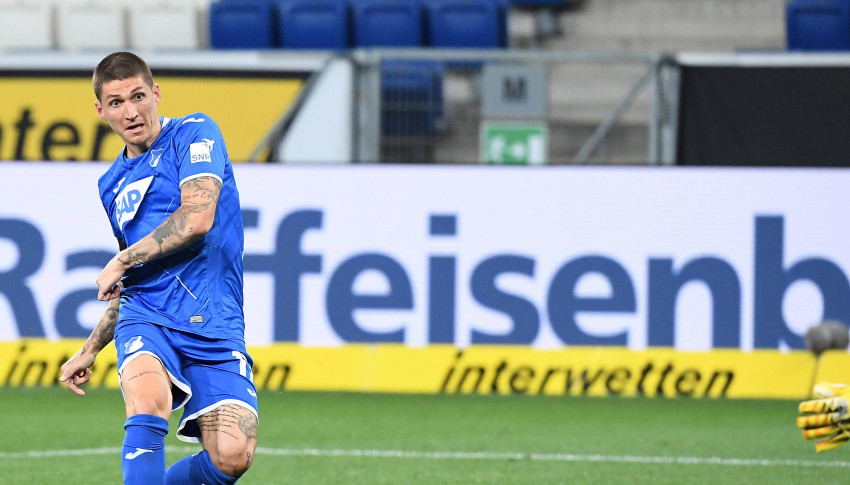 Pushing to the limit