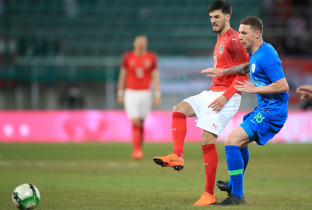 Success for Grillitsch, Zuber and Kramarić

Florian Grillitsch scored his first goal for Austria in the team’s 4-0 win away in Luxembourg. The midfielder won the ball after applying pressure to Luxembourg, got into a one-on-one with the goalkeeper and finished to score in an Austria shirt for the first time. The 22-year-old Hoffenheim player played 80 minutes in the match.
His Hoffenheim teammate Steven Zuber also scored yesterday. The 26-year-old left-winger scored in Switzerland’s 6-0 win over 2018 World Cup side Panama. Zuber was named in the starting XI for his tenth international appearance and played the full 90 minutes.

Andrej Kramarić played for Croatia against Mexico in their last friendly before the World Cup gets underway. The TSG forward was selected for his country’s starting XI in Dallas could celebrate a narrow 1-0 victory in the end after Ivan Rakitić converted a penalty to score the only goal of the match.

Hoffenheim’s Ermin Bičakčić and Ádám Szalai also started for their respective countries on Tuesday evening. While there were no goals in Bičakčić and the Bosnia and Herzegovina team’s game against Senegal, Szalai and Hungary suffered a narrow 1-0 defeat to Scotland.

Robin Hack and Felix Passlack enjoyed yet more success with the Germany U20 team. Hack scored the opening against Poland and the team won 3-0 in the end along. Germany’s U20s are now unbeaten in their last seven games.

Nadiem Amiri and the rest of the Germany U21 team took a hit in their Euros qualification campaign. Stefan Kuntz’s team were unable to score in a goalless draw against Kosovo. However, Justin Hoogma enjoyed a more successful evening with the Holland U21s. The Hoffenheim player came on after 65 minutes in the team’s European qualifier and celebrated a 1-0 win at the end of the game against Andorra.

Wins for Kaderabek and Nordtbeit

Following defeat to Uruguay in the opening game, Pavel Kaderabek and the Czech Republic were in the third-place playoff of the 2018 China Cup on Monday morning (CEST). The Czech internationals took on the hosts China and found themselves 1-0 down at half time. Kaderabek was brought on for the second half and revived his team: Three quick goals turned the game around completely before the 25-year-old TSG man added a goal of his own, making the final score 4-1.

Havard Nordtveit started in Norway’s friendly against Albania, which the Norwegians won 1-0. Nordtveit was taken off in the 63rd minute and replaced by Sigurd Rosted, who went on to score the winner seven minutes later.