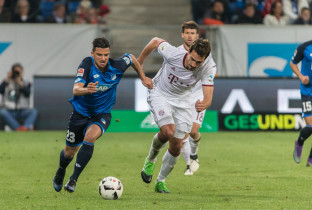 In the 21st minute of Hoffenheim’s 18th encounter with the Munich side, the Croatia international tried his luck on the volley from 20 yards. Bullseye. 1-0. Goal of the Day. It was the club’s 150th Bundesliga home game, and Julian Nagelsmann’s men celebrated TSG’s 100th top-division win, the first ever against European giants Bayern München.

Against a team, that the Hoffenheim boys of 2008 once pushed all the way. Back then, in the December of the club’s first season in the top flight, Eduardo, Ba, Obasi, Salihovic, Beck & Co. drove to Munich and gave the Reds a real fight, a fight which Luca Toni was able to win for the hosts only in the last minute. The club’s first win against Bayern did not seem nine years away back then. Five draws and a further eleven defeats followed, including Hoffenheim’s biggest ever Bundesliga defeat: a 7-1 loss at the Allianz Arena in March 2012. All that, however, was forgotten in April this year.

Our match ticker back then read as follows…

21st minute: Dream goal! Another dream goal! Is he good or what? Andrej Kramaric takes it down 23 yards out from goal, volleys it right into the back of the net. No chance for Ulreich.

85th minute:  TSG is giving it absolutely everything and the crowd are on their feet. Nadiem Amiri can hardly stand

88th minute: Oh boy, the nerves! The three points are within touching distance. That first win against Bayern is so close. See it out, boys!

TSG hadn’t just beaten the mighty Bayern München any old way; they played for it, they deserved it. Alexander Rosen, TSG director of football saw things no differently: "Today, I am extremely happy and a somewhat proud. As everyone knows, we’ve never before managed to beat Bayern, so this is something very special. Especially in the first half, our performance and our attitude was just right. We had no intention of sitting back, we took our game to Bayern."

German newspaper ‘Spiegel’ echoed this opinion online, writing the following: "That’s how it’s done. Hoffenheim beat Bayern with brave attacking football." At half time, in the journalist’s words, "Bayern could have had no complaints about being two or three goals behind." The ‘Sportschau’ even went a step further on their website, with the headline: "Hoffenheim dismantle Bayern München."

And what did the goalscorer have to say? "This is the biggest win in the club’s history. I am proud of the team, the manager, the sporting director and the entire club. Everyone devotes so much energy here. I hope we carry on playing like this and have something to celebrate at the end of the season," said Andrej Kramaric. There was indeed cause for further celebration just a few weeks down the line: another first for TSG. But that’s a story for another day.