After a difficult start to life at TSG, Benjamin Hübner has developed into a leader on the pitch. He is now one of the team’s key players. In this interview, Hübner talks about his unorthodox career path, his ‘old-school’ defending style and his becoming Hoffenheim’s third captain. 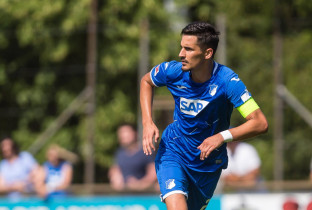 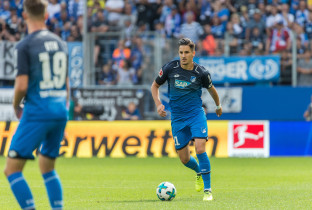 You’ve been at Hoffenheim for two years now and a lot of new players have come in since then. Do you remember your first weeks at the club?

Benjamin Hübner: I’ve been watching all the new arrivals with particular interest because I myself was new last year. I want everyone to integrate well as I was welcomed into the club. I have the experience of being new at TSG so I know what it’s like. I can give advice to the new arrivals. Training under Julian Nagelsmann is special; everyone has settled in well.

Last year you made your first appearance on 6th matchday and you weren’t happy with your situation. Could you have anticipated the huge change over the course of the season?

Hübner: It was always my goal to show my full potential and contribute to the team. I always knew I could, but of course I wanted everyone else to know it, and that’s why my first weeks at the club were tough. It wasn’t easy; I was disappointed because I felt that people didn’t know what I was capable of. Sometimes I was worried that I hadn’t reached the level I wanted to.

Does it damage your confidence to sit on the bench?

Hübner: Of course, but I always knew my chance would come and that I would be able to show my potential. I also had a lot of contact with Julian during that time. I knew that he was counting on me and that he knew what I was capable of.

Is that one of his strong qualities, that he can maintain a positive atmosphere at the club despite the competition for places? Steven Zuber and Adam Szalai are also in the running for the starting line-up…

Hübner: Definitely. I can only speak from my point of view, but I think that every player feels valued and an important part of the team, that he will get a chance to contribute.

You established a regular place in the starting line-up with some impressive performances. What was your highlight of the season?

Hübner: The whole team’s performance. I can’t remember many games when we didn’t try our best. The whole season was a highlight. From a personal point of view, my headed goal in the win against Frankfurt was a special moment. It came at the end of a tight match and it was thanks to that that we qualified for Europe. It was quite emotional.

You are one of the few professionals today who has played on gravel pitches rather than coming out of a youth academy. Now you are playing in Europe on grass. Have you exceeded your own expectations?

Hübner: It’s incredible. You dream of a career path like that but you never expect it to happen. That makes it all the sweeter!

Looking back, was it better for you to play for Wehen-Wiesbaden in the second-tier youth league instead of in a youth academy?

Hübner: Youth academies weren’t always the norm then and it wouldn’t have worked because I quite simply wasn’t at the right level. What the academies achieve these days, the way they develop players, is impressive, but I’m happy that I went down a different route. The development was less intense so I had time to do other things, too. You can see the success of the Hoffenheim academy: the youth players are extremely good and professional. TSG has a strong youth culture and really tries to promote the players into the first team.

You are a hard tackler. Some would describe your style as old-school, tough defending.

Hübner: That’s how I see it, too! That these kind of players are dying out was an opportunity for me. As a defender, my main job is to prevent goals. When the opposition don’t score and get frustrated, then I know I’ve done my job well. I’m happy that the role I play is crucial for the team.

Nevertheless, you don’t seek to get rid of the ball at all costs. You have developed ball at feet.

Hübner: That is something the head coach puts a lot of emphasis on. I’ve made big progress in that department and it’s made me a much better player. We like to play the ball out from the back instead of whacking it into the stands. We’ve made progress doing that as a team, too.

Have you always played as a defender?

Hübner: I started as a striker (laughs), but I became a defender in the U16s and quickly realised this was my better position. I haven’t dribbled past someone in a long time (laughs).

Kevin Vogt arrived at the club at the same time as you did. The pair of you shared a room in the first training camp and now you’re second and third captain for the season. Do you help each other?

Hübner: Kevin has also developed hugely in my opinion. We started together, shared a room in that first training camp and nothing has changed really. We’ve developed side by side. I think he has the best distribution of the league – it makes a big difference to have a player like that next to you. He gives the team stability and we all thrive from that.

Have you and Kevin made a career leap in joining TSG?

Hübner: Definitely, and you can see that in our both playing internationally. We both came here to improve and so far it’s been successful. I think I can speak for both of us when I say it was the best move for us.

Hübner: Of course. I’m grateful for the experiences and the belief that people have bestowed in me, but I also feel I have given back to the club. I have been successful with all the teams I’ve played at, but yes, of course I am very grateful to Hoffenheim.

What does it mean to be made third captain after only a year at the club?

Hübner: I was actually captain at Wehen Wiesbaden, too. It’s a real honour. I didn’t expect it although I always try to help the team and be a leader. The new role strengthens this resolve in me – to be recognised as a leader in the team. Now, I want to fulfil the requirements.

It’s not just your fellow players who are impressed with your performances. Dietmar Hopp has also lavished praise…

Hübner: It’s very pleasing. Praise like that, and to be picked as one of the captains – it makes me very proud.
And now your contract extension until 2021…

Hübner: There were other offers but extending here was the logical move, because of my development here but also because of personal reasons. I’m very happy in Hoffenheim and not only on the pitch. I love the city, and really couldn’t imagine being anywhere else. Sebastian Rudy: the face of TSG