TSG confirmed the signing of Florian Grillitsch from Werder back in January, and the midfielder is now preparing for the upcoming 17/18 season with his new teammates. The 21-year old midfielder spoke to achtzehn99.de about his first impressions of the club, looking for accommodation, skiing and more. 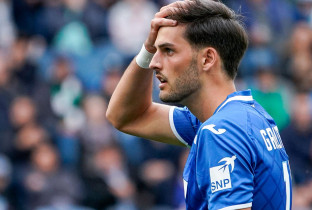 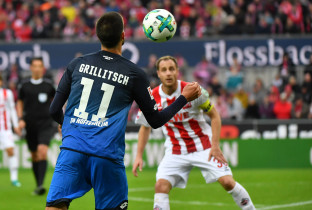 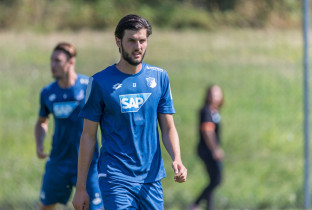 Florian, you have completed your first few training sessions at TSG. How do you feel?

Florian Grillitsch: Very good. I don’t think completing lactate tests is any footballer’s favourite thing, but it’s part of the job. Pre-season preparation is hard work every year, but again, it’s part of the job. We want and have to lay the tactical and physical groundwork in order to have a successful season. We have been working with the ball since the very first day and I’ve been happy about that. I would rather have the ball at my feet than run laps outside or lift weights in the gym.

How have you been getting along with your new teammates?

Grillitsch: It’s been going well. We all get along well together and I’ve got the feeling that there’s a good team spirit here. All the new arrivals received a great welcome from the other players.

The TSG fans don’t know you so well. What do you get up to when you’re not playing football?

Grillitsch: I’m spending a lot of time in furniture shops at the moment to buy things for my new flat in Heidelberg, but the fans will certainly see me soon eating in a restaurant or a café in the town. I’ve been into town two times, but I realised there is so much to see and do.

You will wear the number 11 shirt this season. Why did you choose this number?

Grillitsch: There’s no particular reason. It’s the number I’ve always worn, even since I was a kid. I like it a lot. The number 11 shirt is often worn by attacking players who score a lot of goals. That’s not me, however I do love to get on the scoresheet.

Since you signed for TSG, you have made your debut for the Austria national team. A special moment for you, surely?

Grillitsch: Of course. It is a special moment for any sportsperson. It was an honour to play for my country. We drew 1-1 against Finland. Now I hope that I can continue to impress the national coach whilst playing for TSG and gain more international caps in the future.

There are three Austrians and four Swiss players in the TSG squad. Now answer us honestly here: who is better at skiing?

Grillitsch: The Austrians are better at skiing, obviously. I was part of a Skiing club for two years and learnt how to slalom, then I realised I had a bigger talent and that was football. I still love going skiing, but I haven’t done it so often the past few years. The winter break is too short and the risk of getting injured is too high.

From snow to sun: where did you spend your summer holidays?

Grillitsch: Once the season had ended, I spent a week with my family and friends in Austria before joining up with the Austria national team. Once all international fixtures had been completed, I went to Dubai and Mykonos with my friends to relax a little. Then I briefly went back to Austria before arriving in Heidelberg to find my apartment.

What are your personal goals for the season?

Grillitsch: I want to prove myself to the coach by delivering good performances in training. I must learn the coach’s game plan and understand it. I think the early friendly against Lüttich will be important because we will be able to try out the new things we have been working on. I want to be in the starting eleven for the first match of the season. That is everyone’s main goal.