The fans inside the WIRSOL Rhein-Neckar-Arena witnessed a thoroughly entertaining match right from the off, with both sides playing attacking football. TSG were able to get on top during the opening stages though. 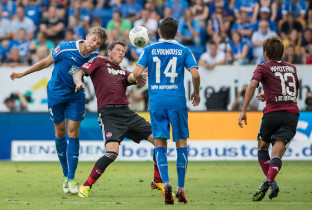 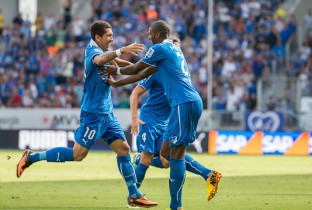 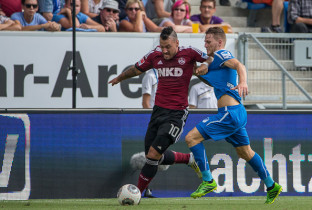 The first chance of the game didn't take long to come – David Abraham won a header from a corner but FCN keeper Raphael Schäfer was in place to make a save. The visiting keeper was almost called upon again ten minutes later, when Roberto Firmino played through Kevin Volland but the Germany U21 player couldn't keep his shot on target.

Nürnberg were struggling to make anything happen early on but suddenly the best chance of the game came for Michael Wiesinger's side. FCN striker Daniel Ginczek broke through on the left-hand side and his shot powered back off the post. That chance granted the away side a bit more confidence, but before it built into another serious chance, Hoffenheim took the lead. Jannik Vestergaard's header was pushed behind by Schäfer and his defensive partner David Abraham managed to head the resulting corner past the Nürnberg keeper.

Anthony Modeste had the next big chance for TSG, unleashing a shot after Firmino's through ball, but Raphael Schäfer got a strong palm to it. It looked as if Volland had made it 2-0 before the break when his lobbed effort dropped over the line but the goal wasn't awarded. After the game, referee Thorsten Kinhöfer acknowledged his mistake, conceding that the ball had indeed clearly crossed the line.

TSG didn't let the decision affect them and picked up where they had left off following the break. In the 52nd minute, Modeste was able to turn the ball in after an attack up the right to score his first Bundesliga goal on his league debut and give Hoffenheim a deserved 2-0 lead.

What followed were three terrible minutes for TSG. Firstly, Mike Frantz reduced the gap to one by heading in at the back post, followed by a Ginczek strike moments later which levelled the scores. Hoffenheim were left shocked, but took back the initiative ten minutes later. Their big chance to get back in front came through Kevin Volland in the 75th minute, whose shot from 25 yards rattled the upright. TSG continued in their search for the winner and played a pressing game.

This left Nürnberg aiming to catch out the hosts on the break and they were nearly successful in the final seconds when Josip Drmic broke away but opted to pass instead of shoot and the chance was gone. Hoffenheim will have another crack at three points next Saturday when they visit Hamburger SV in a 15:30 CET kick-off.